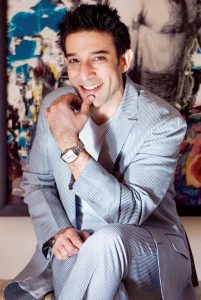 One of India’s foremost couturiers, Suneet Varma is a name that immortalizes glamour and timeless style. After getting his degree from Europe in 1986, he went on to work with renowned couturier Yves Saint Laurent in Paris. Meticulous craftsmanship, a strong design sensibility and an undying love for sartorial research, the Varma brand exudes fantasy, sexy sophistication and unadulterated feminity for the woman of today.

Associations with some of the strongest international brands make him a designer whose forte goes beyond a uni-dimensional profile. The only international designer with Judith Leiber, the world’s most renowned luxury brand for bejeweled handbags, Suneet has garnered great success and appreciation worldwide. ‘Suneet Varma for Judith Leiber’ minaudières are now being retailed across the world at the Judith Leiber boutiques in Los Angeles, Miami, Paris, Tokyo along with Harods in London and Bergdoff Goodman in New York. Every season, his collection is unveiled at the Vandome Fair in Paris. His signature bags are carried by the ‘Sex and the City’ star Sarah Jessica Parker and Hollywood divas Mariah Carey and Jenifer Lopez. His designs are also very popular amongst the leading ladies of Bollywood, like Aishwarya Rai, Priyanka Chopra, Kangna Ranaut, Preity Zinta and are featured on the International and Indian red carpet.

Associated with BMW motors since 2007 to present, Suneet hosts all BMW events, car launches and BMW foundation projects. Having conceptualized a new property of “Fashion Appreciation” evenings, he is currently on a 15 city tour in India with BMW, and continues to develop novel ideas for the brand. He has been invited to design the interior for the new BMW 7 Series to be launched in September 2012.

The brand ambassador for Moet & Chandon from the year 2000-2005, Suneet hosted their shows, corporate dinners and other promotional events in India and in South East Asia. Moet & Chandon also partnered with him for all his fashion events and formal dinner evenings.

For the past decade, Suneet Varma has worked with the International designers at Swarovski on clothing and interior projects. Every year he is invited to the head office at Wattens, Austria to develop Trend Forecasts for Swarovski’s products worldwide. His wedding projects with the company were culminated into the book ‘Unbridaled’; launched in 2009 at Paris.

Suneet has also worked closely with the Bollywood film industry (one of the largest movie industries in the world) and dressed top actresses, socially and in high profile movies. His costume for the award winning movie “Monsoon Wedding” was nominated for the Oscars. He created the look for Hrithik Roshan and Barbara Mori in the movie, Kites. He has also been awarded ‘Designer of the Year’ by MTV.

Retailing exclusively in Delhi and Mumbai, Suneet Varma’s collections are also featured in different multi designer stores in Delhi, Mumbai, Dubai, Chennai, Bangalore, and Chandigarh. Popular amongst the elite upper class, he has been chosen to dress NRI families for weddings and special occasions, like the prestigious Lakshmi Mittal wedding in Paris and shipping tycoon Chellaram’s wedding function in Vienna. In 2001 and subsequently in 2005 he was invited to The World Economic Forum to showcase his collection for the business community at Davos.

The face of different lifestyle brands, Suneet has helped create some of the most iconic and luxurious identities in India. In 2005 Suneet collaborated with an Indian men’s wear label, Tuscan Verve and designed his signature collection which was retailed by Tuscan Verve’s stand alone stores and multi brand stores country wide to great reviews, establishing him in the menswear industry. Time and again, Suneet is invited to style advertising campaigns for the best companies in India including Airtel, Raymonds, The Oberoi group of Hotels and various high-end jewelry brands. Very recently Suneet has showcased his collection in the famous Hammer Museum in Beverly Hills in front of renowned Hollywood directors, producer & actors. He has also bagged two Hollywood films for costume styling & designing. He was appointed along with American super model Cindy Crawford to co-host the Indian launch of Omega watches in 1999.

Admired for his enigmatic work in India and the world, Suneet has been awarded the Designer of the Year award several times by the Bollywood Fashion council in NYC. As a consultant designer, Suneet has also developed designs for design houses in Europe and the USA, namely Donna Karan, Calvin Klien Caroline Heirara and Nicole Miller. Accessories like bags and scarves created by him are sold in the Metropolitan Musem Gift shops in NYC and countrywide.

The designer was invited to Milan and to Rome fashion weeks in 2005 to show case his collections. He has done shows in London, Paris, New York, Hong Kong, Indonesia, Berlin and Los Angeles. Suneet has been commissioned several times by the Government of India to work with the textile sector and revive the handlooms of Benaras and South India and the collections have sold at the Hiem textile fair in Frankfurt.

Suneet showcases his collection each year in the HDIL Couture Week in Mumbai and Delhi Couture Week. He has been chosen to showcase his work in the finale evening for numerous fashion weeks in India and abroad.

Sought for interesting tie ups for PR headed events, Suneet has previously worked with Vogue, GQ, Elle, Harpers Bazaar and the like. Breaking all records in September 2010, Suneet entered the Limca Book of Records by creating the world’s longest embroidered sari for Vogue’s iconic worldwide event, Fashion Night Out. Measuring 55 meters, this work of art was the main highlight of the high fashion event.

Suneet has been appointed as the “Creative Director” for Dusit Devarana hotels in India. He will be working closely with the prestigious interior architect company “Khun Lek Bunnag” from Thailand. As the Creative Director he is designing special textiles, carpets, lighting, mood and ambience for the very high end luxury hotel.

Known for his focus and steady success in retail, he has been recently confirmed as a franchisee partner in India for “Armani Junior” and is spearheading this new business venture, a three store project plan with their first store to open at DLF Emporio, spring next year.

Suneet is the Managing Director and owner of his company, Suneet Varma Design Pvt. Ltd. The company currently has a design studio facility and manufacturing operations employing over 200 persons.

He can be contacted at suneetv@gmail.com